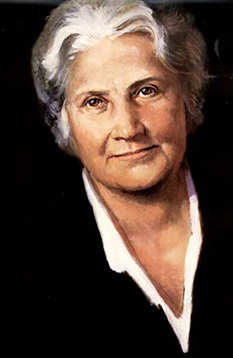 « The world of education is like an island, where the people, isolated from the world, would be prepared for life while being excluded ».

Maria Montessori was born in 1870 in Chiaravalle (Ancona), Italy to Alessandro Montessori, and Renilde Stoppani (niece of Antonio Stoppani). At the age of thirteen she attended an all-boy technical school in preparation for her dreams of becoming an engineer. Montessori was the first woman to graduate from the University of Rome La Sapienza Medical School, becoming the first female doctor in Italy. She was a member of the University’s Psychiatric Clinic and became intrigued with trying to educate the “special needs” or “unhappy little ones” and the “uneducatable” in Rome. In 1896, she gave a lecture at the Educational Congress in Torino about the training of the disabled. The Italian Minister of Education was in attendance, and was impressed by her arguments sufficiently to appoint her the same year as director of the Scuola Ortofrenica, an institution devoted to the care and education of the mentally retarded. She accepted, in order to put her theories to proof. Her first notable success was to have several of her 8 year old students apply to take the State examinations for reading and writing. The “defective” children not only passed, but had above-average scores, an achievement described as “the first Montessori miracle.” Montessori’s response to their success was “if mentally disabled children could be brought to the level of normal children then (she) wanted to study the potential of ‘normal’ children”.

“Scientific observation has established that education is not what the teacher gives; education is a natural process spontaneously carried out by the human individual, and is acquired not by listening to words but by experiences upon the environment. The task of the teacher becomes that of preparing a series of motives of cultural activity, spread over a specially prepared environment, and then refraining from obtrusive interference. Human teachers can only help the great work that is being done, as servants help the master. Doing so, they will be witnesses to the unfolding of the human soul and to the rising of a New Man who will not be a victim of events, but will have the clarity of vision to direct and shape the future of human society”.

Because of her success with these children, she was asked to start a school for children in a housing project in Rome, which opened on January 6, 1907, and which she called “Casa dei Bambini” or Children’s House. Children’s House was a child care center in an apartment building in the poor neighborhood of Rome. She was focused on teaching the students ways to develop their own skills at a pace they set, which was a principle Montessori called “spontaneous self-development”. A wide variety of special equipment of increasing complexity is used to help direct the interests of the child and hasten development. When a child is ready to learn new and more difficult tasks, the teacher guides the child’s first endeavors in order to avoid wasted effort and the learning of wrong habits; otherwise the child learns alone. It has been reported that the Montessori method of teaching has enabled children to learn to read and write much more quickly and with greater facility than has otherwise been possible. The Montessori Method of teaching concentrates on quality rather than quantity. The success of this school sparked the opening of many more, and a worldwide interest in Montessori’s methods of education.

After the 1907 establishment of Montessori’s first school in Rome, by 1917 there was an intense interest in her method in North America, which later waned, in large part due to the publication of a small booklet entitled “The Montessori System Examined” by William Heard Kilpatrick – a follower of John Dewey. (Nancy McCormick Rambusch contributed to the revival of the method in America by establishing the American Montessori Society in 1960); at the same time Margaret Stephenson came to the US from Europe and began a long history of training Montessori teachers under the auspices of the Association Montessori Internationale (AMI). Montessori was exiled by Mussolini mostly because she refused to compromise her principles and make the children into soldiers. She moved to Spain and lived there until 1936 when the Spanish Civil War broke out. She then moved to the Netherlands until 1939.

In the year 1939, the Theosophical Society of India extended an invitation asking Maria Montessori to visit India. She accepted the invitation and reached India the very same year accompanied by her only son, Mario Montessori Sr. This heralded the beginning of her special relationship with India. She made the international Headquarters of the Theosophical Society at Adyar, Chennai, her home. However the war forced her to extend her stay in India. With the help of her son, Mario, she conducted sixteen batches of courses called the Indian Montessori Training Courses. These courses laid a strong foundation for the Montessori Movement in India. In 1949 when she left for The Netherlands she appointed Albert Max Joosten as her personal representative, and assigned him the responsibility of conducting the Indian Montessori Training Courses. Joosten along with Swamy S R, another disciple of Montessori, continued the good work and ensured that the Montessori Movement in India was on a sound footing.

During a teachers conference in India she was interned by the authorities and lived there for the duration of the war. Montessori lived out the remainder of her life in the Netherlands, which now hosts the headquarters of the AMI, or Association Montessori Internationale. She died in Noordwijk aan Zee. Her son Mario headed the AMI until his death in 1982.

Maria Montessori died in the Netherlands in 1952, after a lifetime devoted to the study of child development. Her success in Italy led to international recognition, and for over 40 years she traveled all over the world, lecturing, writing and establishing training programs. In later years, ‘Educate for Peace’ became a guiding principle, which underpinned her work.